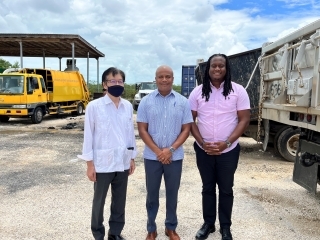 On April 29, Ambassador IRYU Kazuhiro visited the Belize City Council's Public Works Department Refuse Collection Facility located in the suburbs of Belize City, and was briefed by Mayor His Worship Bernard Wagner, Deputy Mayor Mr. Micah Goodin and others on issues related to refuse collection in the city. Belize City is the largest commercial city in the country in terms of populaion, and the city is faced with the problem of waste disposal due to its growing population. Ambassador Iryu expressed his willingness to consider supporting the city's efforts to improve its environmental problems, including waste management.